The Art of Being Laki Senanayake

I find Laki Senanayake perched among his sculptures in the Barefoot gallery, laughing as he talks with the staff. He’s bare-chested, dressed in a bright orange sarong, his modesty preserved by a shawl in bright pink, red and orange slung over his shoulders. He has a red lighter tucked into the fold of fabric at his waist. He is 78 years old.
The abundance Laki contains within himself has not faded with age. His irrepressible vitality manifests itself in a portfolio of work that is so large, and so diverse, that it seems impossible to keep track of, even for the artist himself Today, he cannot recall when he last had an exhibition dedicated predominantly to sculptures – instead there have been several collections of his paintings, a book cataloguing his long obsession with owls, articles in the press about his work with landscapes, his endless capacity for innovation.
There is a simple explanation for this. When it comes to sculptures, he usually works on the basis of commissions, and his metal creations go straight from his open air studio in Diyabubula to their new homes, without a pause in a gallery along the way. But sometimes, he will have his two baasunnes work on a new sculpture just to keep them busy.While he decides what to do with the finished pieces, the sculptures must bide their time in his water gardens in Dambulla; the boar and its piglet screech to a halt at the edge of the pond, the owl perches on the highest point of his roof, an elaborate chandelier hangs from a nearby tree, spinning slowly in the breeze. 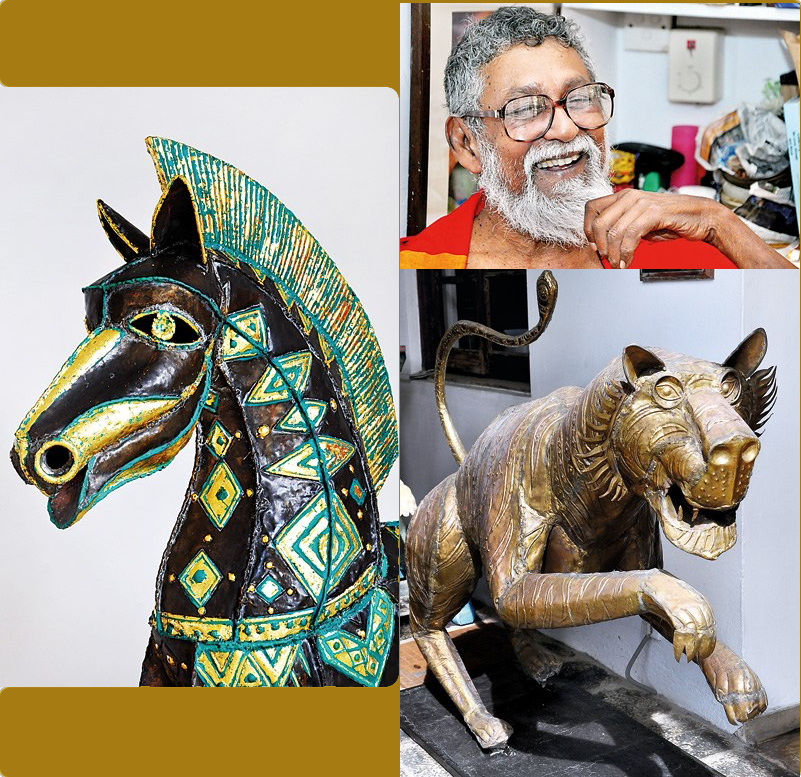 The garden has always seemed a more natural setting for Laki’s creations than the gallery – not least because so many are inspired by the natural world.
His earliest memories of sculpting are from Lunuganga, where he remembers working with a tinker who came to make the gutters for Geoffrey Bawa’s beautiful home there. Laki never had any formal training, which he does not consider necessary. “Most people don’t bother to simply sit and look at things. You just have to break the animal’s shape down geometrically,” he says of design, as for the technical skills needed, various basunnes have taught him all he knows.
Over the years that followed that first attempt, he would make over 40 sculptures for Bawa –Laki estimates he was only ever paid for two, but the assurance that the figures would be displayed to perfection and be well cared for was, at the time, all the incentive he needed.
Laki’s collaboration with Bawa, and with the man’s successors, acclaimed architects like Anjalendran and Channa Daswatte, have created an enduring demand for his sculptures. Perhaps his most accessible work is the famed staircase at the Lighthouse Hotel in Galle. Bawa initially requested a painting that would follow the curving walls but with only six months till the hotel’s launch, Laki suggested using statues instead. The architect imagined these would be as tall as the balustrade, some three feet high, instead what he received was a magnificent, life-sized battle: the Portuguese in their armour, with their spears and horses, advance up the stairs,only to be met by the fierce Sinhala army, bearing weapons of their own. At the very pinnacle, over 15 feet up, sits a flute playing Sinhala king, whom Laki immodestly admits he modeled on himself.
There were other grand projects with Bawa – a 40-foot Bo leaf with a dense pattern of Buddhist symbols for the 1984 expo in Osaka, the peacock in the Bentota Beach Hotel, the palm at the Neptune Hotel. But for every sculpture accessible to the public, there must be five confined to private homes. A small selection of these are represented in the exhibition in the form of photographs, among which are two examples of Laki’s chandeliers. Standing before one, he confesses he abhors the direct glare of an un-shaded bulb. Instead, his vine-inspired creation has the lights embedded within it, so that it produces a mysterious luminescence.
Laki does not produce these sculptures alone. The design comes from him, and it is he who makes the base wireframe. But the cutting and beating of the sheet metal, and the welding of the sharp edges is done by others under his supervision. He works mostly with brass sheet and copper, but the ‘Silver Owl’ in this collection is made with paper pulp. (Once he used to work with lead, a material he abandoned abruptly when he realised the only thing that had spared him severe poisoning from the fumes was that he was outdoors the whole time. He has worked with sheet metal ever since.)
Laki might start with a sketch, but in keeping with his restless mind he never looks at his painting once he has begun work on the actual sculpture itself –“then you get fixed to an idea, you are copying yourself. Then it’s not really interesting.” Amazingly, considering this relaxed approach, he has never had to discard a sculpture that he has started.
Aside from the gleam of brass and copper, there are sculptures in this collection delineated with red paint, and touched with silver and gold. Laki does this with an eye to their aging. “Brass gradually oxidises and goes dark and you can’t polish many of these sculptures.” The additions Laki has painted on will help retain colour and character in years to come.
A few of the sculptures collected here have an interesting history. The design for ‘Rhinoceros’ dates back to 1515 and is based on a woodcut by the German painter Albrecht Dürer. “It was called the Pope’s rhinoceros, because it was being sent to the Pope. But when it got to the Mediterranean coast of Africa, the animal died. And so Dürer rushed there – not many had seen or heard of such an animal then – and he made this woodcut.” Another piece, titled ‘Escutcheon for a Tyrant’ is a celebration of Laki’s love of medieval weaponry. (He has no patience with guns.) Laki has done several along this theme – ‘Altar for a Tyrant’ and ‘Throne for a Tyrant’ complete the set.
We have walked the room once, and Laki is tired of standing. His spondylosis is painful today but his good humour is undimmed. Family commitments mean he cannot return to Diyabubula in a hurry and so he is resigned to the city. As always, he is painting -casually, inventively, constantly– and he carries a set of small watercolors as gifts around in a brown envelope. He hands these out with easy generosity, smiling at the pleasure of each recipient. When he is finished, he goes looking for a fan and a table in the shade.
Published in the Sunday Times, Sri Lanka on August 16, 2015. Words by Smriti Daniel. Pix by Indika Handuwala.
Source : https://smritidaniel.com/2015/09/30/the-art-of-being-laki-senanayake/
Tweet